The End of Our Church Planting Journey

Sunday, January 15th, was a pretty important day for us. It was our last meeting as Summit Community Church. I shared with our people then, our monthly partners that week, and I wanted to share directly with you that keep up with us through social media, my blog or whatever way you have been following our journey. At the counsel of my pastor I prayed into when to share these things. I tried making a short video, so that more people would be apt to watch as many don’t read blogs, but I honestly just couldn’t make it through the recording. I would be a liar if I said that even though I believe this to be God’s direction that it doesn’t hurt.

The stories I got to hear our last meeting from the 8 adults that were there blessed me tremendously. The texts since have done nothing less. I’m proud that our legacy, though short lived, will be one of instilling a passion for relational discipleship, our genuine pursuit of Jesus, our vulnerability in leadership as an avenue for growth, as a house where there is harmony between the word of God and the manifestation of the Spirit, and a place that more than anything people called family. One woman shared how she had just ‘been’ to church but never known anyone there or what it meant to really follow Jesus. She found it with us. Another shared about how her parents passing left her as an orphan and when she became a part of us she felt like she found real family for the first time since then. Still another shared that the first person he ever personally led to Jesus happened while he was here and learned what it meant to be a disciple. Another shared how she learned what it meant to really be an owner in her church and serve from a place of learning that she really is a leader not just a ‘doer.’ We have seen at least one person make a first time decision to follow Jesus, multiple people ‘recommit’ to following him, served other churches as a team during their big events, given away close to 2K (over $700 from our 1 for 1 offerings), seen multiple healings both in our gatherings and just through promoting ‘lifestyle Christianity,’ made amazing friends, and more. I’m hopeful this fruit will translate to the next part of the our personal journey as well as the ones that called SCC home.

Officially we are ‘closing.’ Unofficially, we have encouraged people to plug in to a church that has shown us much grace, been true family, and provided our greatest source of encouragement during this journey. This was not a conversation their pastor began, but a course of action I felt most healthy for our church and it’s community.

Over the past few months we have taken multiple hits both as a church and on a personal level. I’m not going to get into it much. I you know me on a personal level you know that while I value vulnerability I’m a pretty private person, especially with what I choose to share online. Because people can be hurtful I do feel a need to clarify this is not a decision due to personal, private sin. I know most of you don’t have minds that go there, but unfortunately a few will assume the worst.

What I was left with in praying about our course of action was this observation: Sometimes what we call ‘faith’ God looks at and calls it a ‘lack of wisdom.’ Other times what we call ‘wisdom’ is really the manifestation of our doubts in disguise.  Nikki and I met with 2 of our ‘overseers’ for counsel on whether we move forward or not. We were on the verge of getting 30K from our denomination and I am not about to be a bad steward of kingdom resource in hopes that it jumpstarts our efforts when I may be working against the Lord.

We left that meeting with two main takeaways: (1) step back and be objective. Act like you’re on the other side of the table giving the counsel. I’ve been in that situation before and it’s not fun, but it’s helpful. And (2) at the end of the day you have to get a ‘yes’ or ‘no’ from the Lord.

When I was objective I discovered these things:

-Our leadership team has gone from 10 to 2 besides Nikki and myself, in a year. Even beyond that I can count on one hand those I know are going to be at things we have going on and will set up, stay to clean up, and really be a part of the process. This is the primary reason I did not just push a timeline further back and reevaluate our method. I cannot take all the credit for this, and to my knowledge no one has pulled out because of malice or anger, but a team shrinking this quickly leaves me needing to search out potentially deeper issues.
-Out of a significant number of churches churches that I have asked for monthly missionary support for our church we have 0 churches supporting us consistently.  Many gave me a ‘no,’ many were a ‘no reply.’ Some of this is because I admittedly suck at fundraising. Still, zero is a significant thing to me.
-Our budget is just shy of 10% of what we were supposed to have raised by this time for monthly commitments (we had 6K monthly budgeted, which in church world is already an extremely lean budget). We had just under 600 in monthly outside support, all from individuals, when I made the call to stop. Even inside, our family and one other made up roughly 40% of the tithes/offering.
-No one has joined and stuck since the summer. People have come. There are maybe a couple dozen ‘fringe’ people, but there’s a huge difference between ‘helping’ or ‘visiting’ and actually being a part. Visitors can’t help plant a church.
-The people that are active and being discipled aren’t at risk of disconnecting if our church stops. This was one of my most important factors as a shepherd. I’ve spoken personally with most and ensured that they will be joining a life giving church. Many have joined a church called ‘The Square,’ who we love and honor deeply.

Still…those are just the ‘circumstances.’

I still needed a yes or no from God. I spent a number of weeks in focused, intentional prayer around just this. It was Monday, January 9th at IHOP (the house of prayer) in Lawrenceville that I got a crystal clear answer from the Lord to not move forward in our planting efforts. I will wrestle with why God calls you to something only to not have it progress and eventually stop later…for now I have to accept his answer, walk in peace, and be obedient.

I will grieve this, and rightly so. We moved here. So did others. I’ve invested over 2 years in this, and personally thousands of dollars in sacrificial giving, literally thousands of hours in plowing and sowing and building. Others have sown time, coaching, tears, intercession, resources and more. A pastor of mine shared something to this affect with me; ‘Andrew, when you immediately try to turn painful situations into a learning moment you rob God of the opportunity to use pain and suffering to enlarge the capacity of your soul.’ So for the next few months, I’m not going to learn from this or figure it out. I’m going to sit in it and position my soul in a Godward posture.

Recently I was on a trip up north and sitting around a campfire making smores..well they were making smores. I wasn’t, because smores are gross. A friend of mine was sharing his church planting journey, about how beautiful it is, even through the all the difficulty associated with planting, to nurture a baby church and watch as it ‘learns to walk on it’s own’ and it hit me; I will never ever know that joy with Summit Community Church. As the pastor of SCC I will not baptize a new believer, send out a new church plant team, preach another message, look around and see all God is doing at the Summit. We tried. It didn’t work. Though I experience genuine joy for my friend, in the moment I couldn’t take it. I had to excuse myself.

I went to the back porch in the cold and just began to silently weep and weep and weep. I couldn’t stop my tears. After maybe 20 minutes of being alone with God, being vulnerable, and staring at the ground the voice of the Lord whispered to me ‘look up.’ I looked up and stared at the sky for maybe three or four minutes waiting on the Lord and as soon as it was one my lips to ask ‘what is it I’m supposed to be looking at?’ the Lord said ‘Andrew, as long as there are stars in the sky I will still have promises over your life.’ His ways are higher than mine. His thoughts, higher than mine. He is good. He is faithful. And He knows what He is doing.

Even still, through the pain, I am at peace and believe this is where God is directing us. Scripture is laden with stories of circumstances being diverted and shifted by a sovereign God so that He receives maximum glory. Of the increase of His government and peace there will be no end. In the Kingdom then, this is not the death of something, but the end of a season and the beginning of a new one where right now.

Thank you for praying for us. 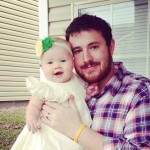 1 thought on “The End of Our Church Planting Journey”